Giselle: Do It As If It’s Your Last

Giselle (Nirodey KONG, 20) is a senior student majoring in International Relations at Paññāsāstra University of Cambodia (PUC). She works as a Public Relations Officer at Lodosha. Giselle is primarily responsible for maintaining a positive public image while developing promotions for services of Lodosha. Her works involve planning PR strategies, writing blog articles, scripting for advertising or promotional videos to be produced, designing posters, responding to the inquiries of the candidates on social media as well as making phone calls with candidates.

Talking to different candidates and writing new blog articles everyday at Lodosha make Giselle consider herself as a great communicator, very responsive and sensitive listeners, and a decent writer who enjoys uncovering and telling fascinating stories. At the same time, she believes working at Lodosha can improve her problem-solving skills as well as increasing business awareness and a good knowledge of current affairs. 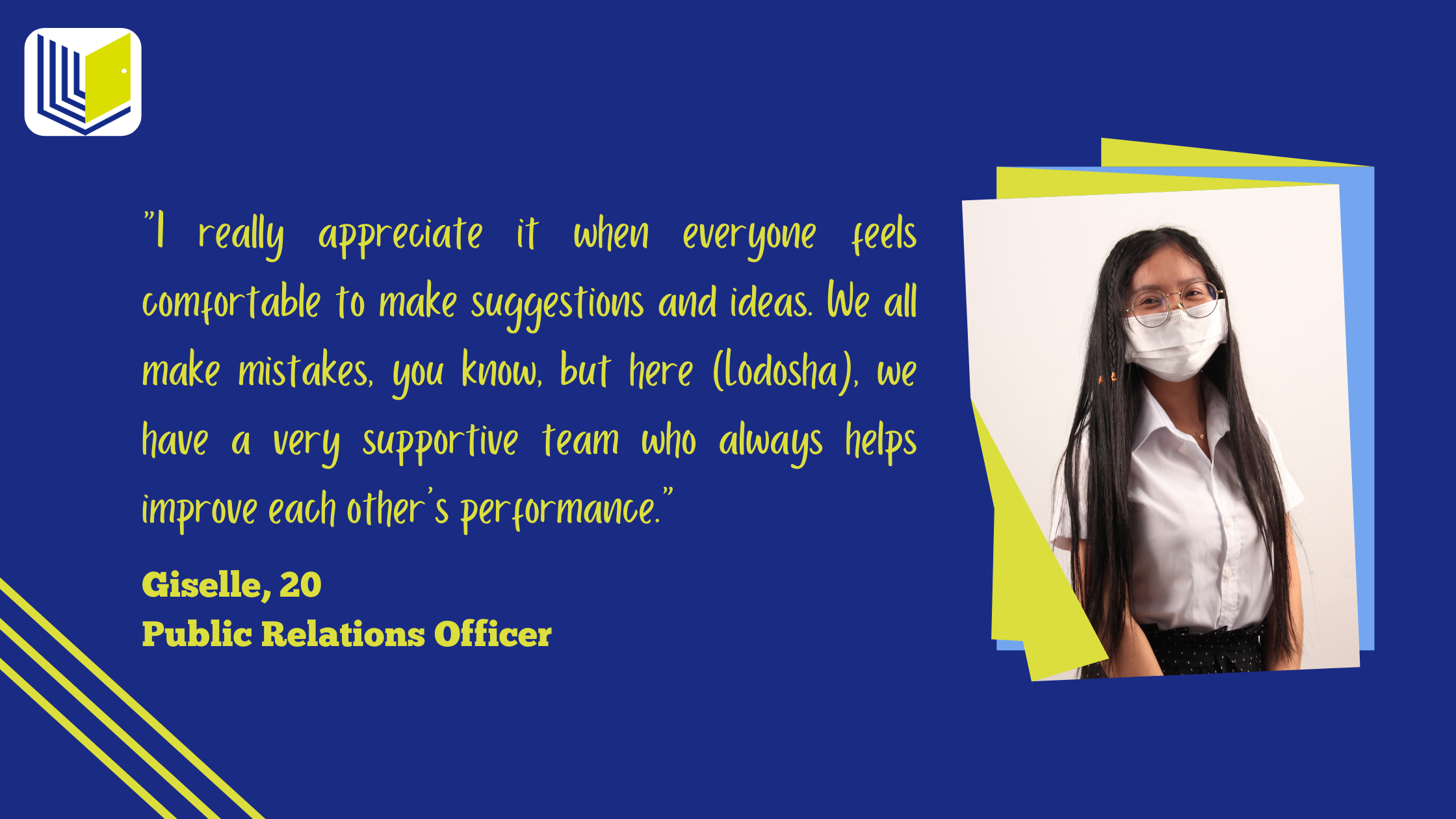 Giselle finds working as a team at Lodosha is very rewarding. “ I really appreciate it when everyone feels comfortable to make suggestions and ideas.”, she expressed her delight. “We all make mistakes, you know, but here (Lodosha), we have a very supportive team who always helps improve each other's performance”, she added. She believes that a respectful and trustworthy team environment will not only enable them to think more creatively, but will lead them to more productive and collaborative brainstorming sessions. That’s what makes her like most about Lodosha.

In the next five years, Giselle wants to see Lodosha as a strong and successful dispatching company sending both qualitative and quantitative Cambodian workers to Japan. If she gets to describe Lodosha in three words, it would be “Transparent-Quality-Innovative”.

Giselle’s birth name is Nirodey KONG. But at Lodosha, she prefers to be call “Giselle” which means “Bright Pledge”. Giselle is very intelligent and picks up knowledge quickly. She is perceptive, analytical, and often very funny. She has an unreserved and childlike curiosity, always asking new questions. Giselle has an uncanny ability to size up a person’s personality in a matter of seconds, even if she only just met them. If someone’s bluffing, she’ll be the first to notice.

Giselle is not much for physical activities. She likes to spend her leisure time on brain stimulating activities. She loves listening to soft music with good lyrics. She also enjoys listening to K-pop songs . She is an ARMY (a fan of BTS) because she finds them to be truly inspirational, not only in terms of their music lyrics but also in terms of their teamwork. She said, "I am constantly impressed by their (BTS) quote: Teamwork Makes The Dream Work.” “That (BTS) always reminds me of what we are doing at Lodosha. We all have the same goals in mind, and we're working together to achieve them,” she continued. Besides listening to music, Giselle, sometimes, spends some of her free time painting aesthetic pictures, writing, and reading books. Her most recent book that she has read is "Three Flames" by Alan Lightman. 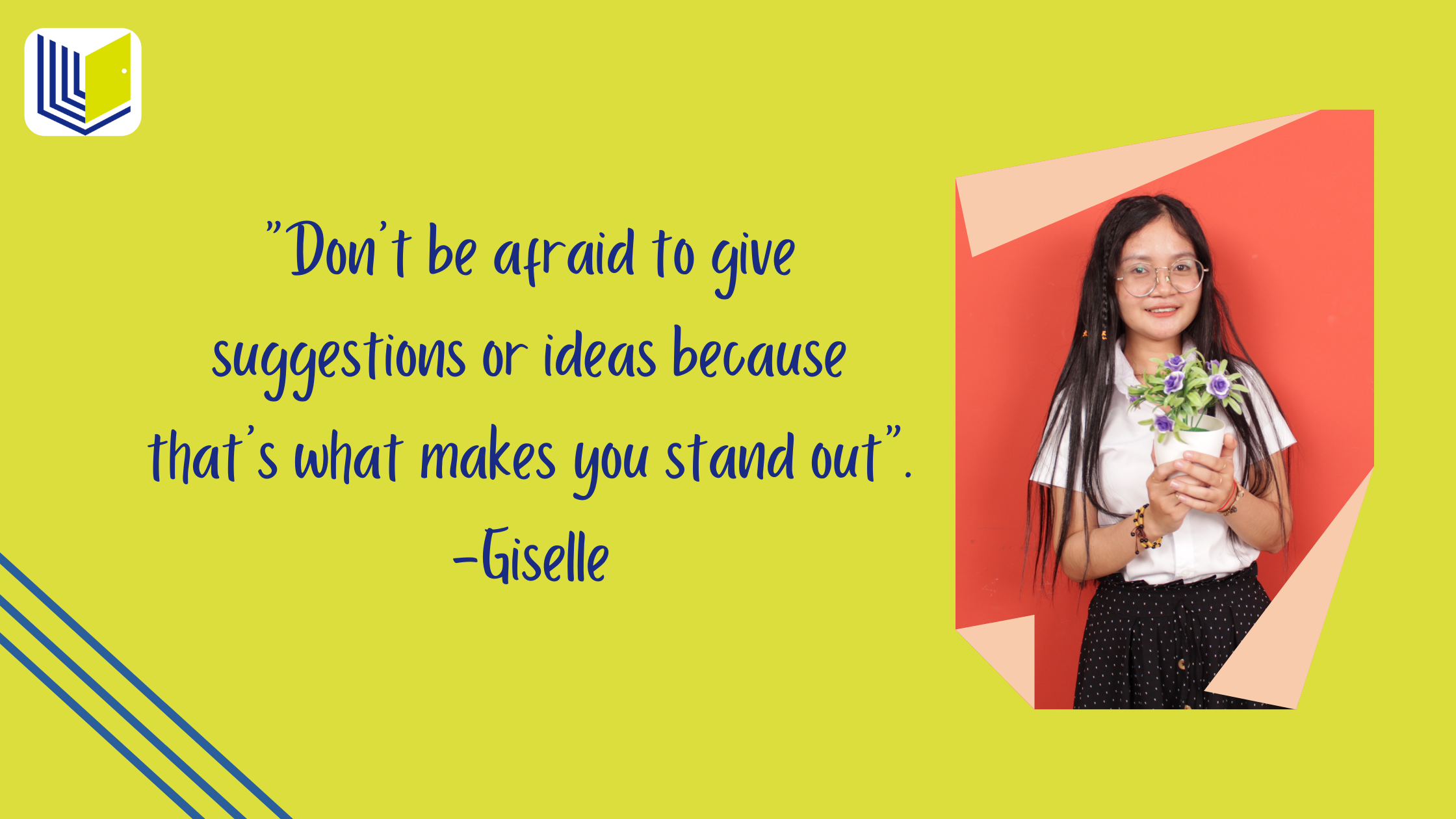 When she was asked if she could switch her job with anyone at Lodosha, she said that she wanted to work as an IT officer. She found it interesting to learn more about technology and apply it in her daily life. If there is a new hire at Lodosha, what she would like to advise him/her is “Don’t be afraid to give suggestions or ideas because that’s what makes you stand out”.

Interestingly, if she were cast in a Hollywood film, she would play a role as a “young female Astrophysicist” who performs research on the planets, the stars, other galaxies and objects in the universe. Last but not least, if she gets to describe herself in three words, it would be “Loyal-Patient-Creative”. Her personal motto is: “Do it as if it's your last.”